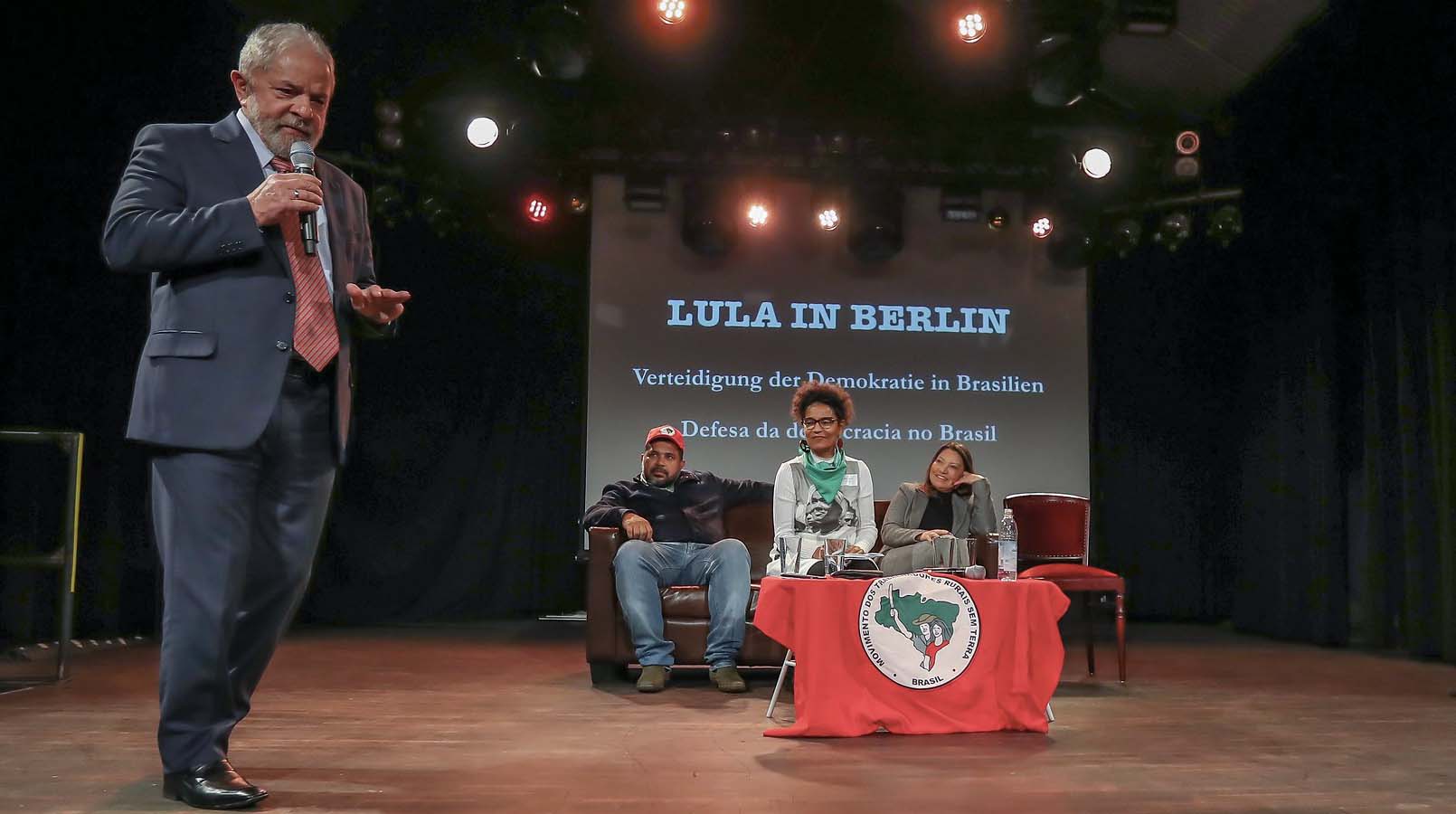 Former president Luiz Inácio Lula da Silva has returned to Brazil after almost two weeks touring through Europe to debate the fight against inequality. He has crossed three European countries and also addressed issues like the environment, the future of work and the financialization of capitalist economy, in meetings with several political, intelectual, trade union personalities and activists. This trip has highlighted the former president’s international prestige as well as the acknowledgement he’s a global icon in the struggle against inequality.

Da Silva arrived in Paris on March 1, then travelled to Geneva and Berlin following an eventful agenda.

Berlin
Lula’s last appointment occurred yesterday evening with Kurt Beck, chairman at the Friedrich-Ebert-Stiftung, after meeting with Martin Schulz, former president of the European Parliament and member of the ‎Social Democratic Party in Germany.

Schulz, who visited Lula da Silva during his political imprisonment last year, defended the former president’s innocence once more: “If Lula had been a presidential candidate, Bolsonaro wouldn’t have been elected. They have thrown the candidate leading in the polls into jail and it seems like a coup d’État. I’m not a jurist, but I observe the law has been stretched to their advantage. Lula hasn’t been treated according to the Law”, he said.

Lula had already met other SPD representatives: Niels Annen, member of the German federal parliament, and Norbert Walter-Borjans, leader of the Social Democratic Party in Germany. He has also talked to the Die Linke’s leader Bernd Riexinger, and to the Party of European Left’s political personalities, as well as former minister of Justice Herta Däubler-Gmelin.

Former president Lula has attended two conferences during his stay in the German capital. On March 9, he gathered with trade unionists to debate the current status of the working class. “The poor people and those who need the most keep on paying for the financial crisis. It’s imperative we create a global mobilization against concentration of wealth to get to the root of inequality”, he then declared.

On the next day, he attended a debate organized by, among others, the Deutsche Initiative and the Free Lula Berlin Committee. Almost 800 people from all over the world showed up to the so called event “The defense of democracy in Brazil”.

The agendas in Paris and Geneva were also eventful.

Paris
In Paris, former president Lula had a meeting with La France Insoumise leader Jean-Luc Mélenchon, and afterwards, with former French president François Hollande. The former chiefs of State have talked about “the environmental issue and the fight against inequality, that must always be at the core of all fights”, he reported. At the end of the day, mayor Anne Hidalgo gave former president Lula the Honorary Citizen of Paris title for his struggle against hunger and inequality.

Still in Paris, Lula da Silva has also met one of the most celebrated economists of his day, the “Capital in the Twenty-First Century” author, Thomas Piketty.

In addition to that, parisiens and activists alike showed him solidarity during the Free Lula Festival, organized, among others, by the Libérez Lula Committee. During the event, Lula made a comment on the political and judicial persecution he has been suffering: “Unfortunately, in Brazil, Car Wash Operation has been the result of a political agreement between national Justice and Press. First, the Press declares one guilty, then Justice judges”, he stated.

Finally, he met former prime Minister of Italy Enrico Letta and former French president Nicolas Sarkozy, to whom Moro’s partiality became evident when he accepted to take part in Jair Bolsonaro’s far-right government. In both meetings, the global rise of authoritarianism was a matter of concern.

Geneva
On March 5, Lula traveled to Geneva, where he gathered with the director of Globalisation and Development Strategies Division in United Nations Conference on Trade and Development (Unctad), and later talked about Lawfare and human rights with former Brazilian minister Paulo Sérgio Pinheiro.

On the 6th, Lula met with World Council of Churches’ representatives to debate the churches’ role in the struggle against inequality. After the conference, the organization’s secretary-general, Olav Fykse Tveit, declared the two of them are working “together for justice and peace”, and that Lula is “the name we can never forget. […] A man of passion for social justice, for equality in rights and in opportunities to work, and a fair sharing in the economy”.

Da Silva’s last appointment in Geneva was a meeting with the director-General of the International Labour Organization, Guy Ryder, when they approached “the changes in labour market and the withdrawal of workers’ rights in the 21st century”, according to the Lula’s Twitter account.

This is the second time Lula da Silva travels to Europe this year. In February, he was received by Pope Francis in Vatican City. In Rome, he gathered with jurist Luigi Ferrajoli and Franco Ippolito, Basso Foundation chairman, and also attended an event along with the Italian General Confederation of Labour and the Italian Free Lula Committee.

Lula: Pope wants to leave long-lasting legacy for the world